Gardnerians are the race of people from Gardneria.

Gardnerians have black hair, green eyes, and pale skin that has a slight emerald shimmer. Anything different is considered mixed or "not pure."

Gardnerians wear uniformly dark clothing, usually black. Women wear tunics over long skirts. Women must be completely covered, from their neck to their wrists down to their feet. Elloren says she has never shown so much as a bare ankle in public.[1] The wealthy wear fine fabrics such as silk with glittering gems. The poor wear woolen homespun. Their military wear black tunics with silver spheres marking their chests. They also have wands and swords at their sides. Military apprentices wear slate gray uniforms.

Gardnerians are most likely the descendants of the union of Kelts that settled at the Northern Forest border and Fae Dryads. This would explain why they have a slight emerald shimmer to their skin and black hair, and why they possess some weak branch magic. While the Dryad Fae were killed off long ago by the Kelts, Dryad blood lived on in the Mage line. The Dryad branch magic magic lived on as well, although at a very weak level. Only intricately laminated wooden wands could bring forth a fraction of the same magic Dryads could access through simple branches.

The Kelts were prejudiced against the Gardnerians. They treated them very badly, and abused them in every way. The Gardnerians were treated like slaves and sometimes killed at birth. The Kelts saw them as "half-breeds polluted by Fae blood." It was Styvius Gardner who led the Gardnerians into freedom and gave them a homeland. He did this by torturing and killing Kelts on a grand scale. This was the time of the Keltic War. The war was ended when a Vu Trin sorceress killed Styvius. Following the end of the war, was a time of peace.

Then came Carnissa Gardner, who would come to be known as the Black Witch. She was born at a time when Gardneria was seeing its borders shrink as the Kelts reclaimed lost land by rounding up and murdering Gardnerians. She set out not only to avenge the Gardnerians, but to finish what her ancestor, Styvius Gardner, had started. This was the Realm War.

Now the Gardnerians have built the most powerful army they have ever had, with more dragons at their command than ever before. If another Black Witch rises, it is likely that the Gardnerians will succeed in taking over every land that exists on the map. They will make everyone who is not a Mage into a slave, with the exception perhaps of the Lupines.

Gardnerians are an extremely conservative and religious people with a strict patriarchal society. Few Gardnerian women have wand magic, and almost all the powerful Mages are men. This is believed to be because magic passes more easily along male lines. Their superior magical abilities gives Gardnerian men the power to be the "rulers in the home and over the land."[2] The eldest male in a family has complete control over the younger family members, and any older female family members without a husband. Women are not allowed to have wands without approval from the Mage Council. The highest position in the government, the office of High Mage, can only be held by a man. Women are not allowed into certain Guilds, such as the music crafter's Guilds.

Art in Gardnerian culture is heavily religious and strictly controlled. The only colors allowed each have their own meanings: black for their oppression, dark green for their subjugation of the Fae wilds, red for the blood of their ancestors, and blue is only allowed for depicting the sacred Ironflowers, and only in their hue. Gold, orange, and purple are considered Fae colors and are gravely forbidden.

The Gardnerians are despised by the other races. They are often called derogatory names such as Crows and Roaches.

All Gardnerians wandfast, which is similar to being married, except it is for life and there is magic binding the couple together. A person's partner is not referred to as "husband" or "wife," but as their "fastmate." Sex is considered singful in Gardnerian religion. Its sole purpose is to make more Gardnerians. Sex for any reason beyond that is considered immoral. Gardnerians are "supposed to rise above their base natures, not be like wild things."[3]

Their language is called Gardnerian. They also have a language known as the Ancient Tongue.

The Ancient One is often represented by large white birds called Watchers. Another important symbol in the Gardnerian religion is the Ironwood flower. This flower is meant to represent the Ancient One's promise to keep the Gardnerians from oppression. Their holy book tells them that they must wear the colors of night to remember their long history of oppression. Trees are incredibly important to the Gardnerian religion. They symbolizes how the Ancient One created them from the seeds of the sacred Ironwood Tree, giving them dominion over all the trees and all the wilds.

According to the Gardnerian religion's creation story, The Icarals were once the Angelic Ones who went against the Ancient One. When the First Children refused to join them, the Angelic Ones brought the other races into being and set them against the First Children. The Book of the Ancients also claims that magic is not for women, and only the prophetess Galliana and the Black Witch were granted the holy charge to wield magic and save Gardneria.[4] The strictest group of the Gardnerian religion is known as the Styvian sect. They adhere with pure, unflinching submission to every rule in The Book of the Ancients. The Gaffney family is a part of this group.

Every Mage posses a different proportion of the five elements. A Mage's affinity lines directly relate to what they can or cannot perform with their wand. It is said that they draw power from their affinity lines, harness it, and produce it from their wand when performing spells. Those who lack wand magic skills will often still have strong affinities enabling them to excel in other areas such as archery, glasswork, apothecary skills, or music. Some mages can sense others' power, often if they have similar affinities. This is generally a trait of very powerful mages of the highest level. If a Gardnerian Mage has too much magic trapped in them, they are what's known as Magedrunk. If the magic isn't released, it will kill the Mage.

To access their affinity lines, a Mage must hold their wand so that it makes contact with their palm. Otherwise the wand energy cannot flow through them. Then they speak a specific spell to cast magic. Most Gardnerians, especially poor ones, don't own wands. Even poorly made ones are outrageously espensive. Wands are difficult to craft and even harder to obtain. The Gardnerian seers cast sticks etched with sacred symbols. 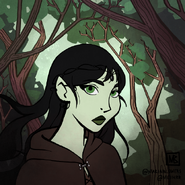 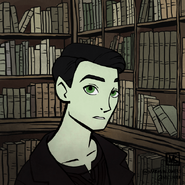 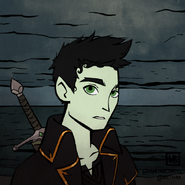 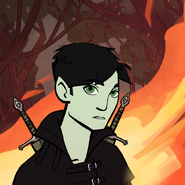 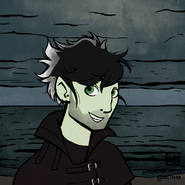 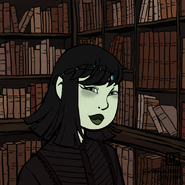 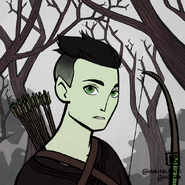 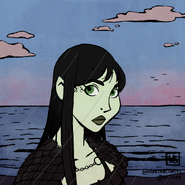 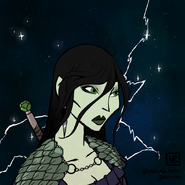