Icarals are a race that is considered evil by many other races in Erthia.

The unifying feature of Icarals are their black, feathered wings. Otherwise, Icarals vary greatly in appearance. Icarals who have their wings removed or damaged are called "broken Icarals." Icarals who have their wings ared called the "Winged." Broken Icarals have milky-white eyes, gaunt faces, and tattered wings. They also have a foul smell like rotted meat. Mixed-blood Icarals may appear entirely similar as their other race, except for their wings. Icarals are also very strong when they are not weakened by Nilantyr, a powerful and addictive sedative.

No one knows for sure where Icarals come from. They have popped up in virtually every race as far back as can be remembered. Practically every race's religion cast the Icarals as demonic beings. Like the Fae, they can be full of unpredictable power. They are often dangerous as children, most likely because they have wyvern blood. Jules Kristian postulates that Icarals are so universally hated because their existence interferes with cherished ideas of racial purity that the other races of the Western Realm have.

After the Realm War, the Gardnerians began imprisoning Icarals in the Valgard Sanitorium. As part of the international treaty following the Realm War, other countries, such as Verpacia, are bound to surrender male Icarals to Gardneria because of the The Gardnerian Prophecy. Imprisonment of female Icarals is still voluntary and at the discretion of the Icaral's family. 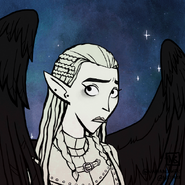 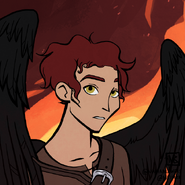