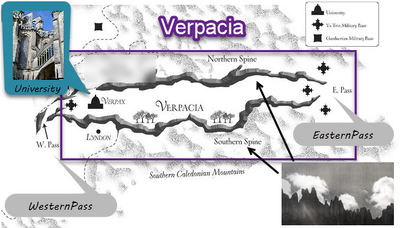 Verpacia is a country located in the Western Realm of Erthia. People from this country are called Verpacians.

Verpacia occupies a thin sliver of territory between the Northern and Southern Spine mountain ranges. The western pass opens near Valgard, Gardneria, and the eastern pass opens near the Eastern Desert. There are two major forested areas in the southern part of the country.

Verpacia is a central trade route in the region, facilitating the movement of goods between the west and the east. It is also the location of Verpax University, located in the capital city of Verpax, just inside the western pass. 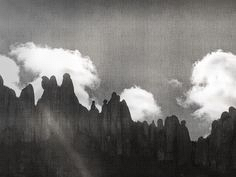 The main geographic feature of Verpacia is the Verpacia Spine, an impassable mass of vertical rock that borders the country of Verpacia. It is a white-gray rock that reaches high up into the sky and the tops of the mountains are covered by clouds. Multiple guard towers are carved into the cliffs, hewn from the rock itself. There are two ways through the Spine, the western pass and the eastern pass. The Northern and Southern Spines are like two great walls bracketing the entire country. It is unknown if Verpacia's territory continues into the Eastern Realm, or if they only maintain Vu Trin military bases in the area.